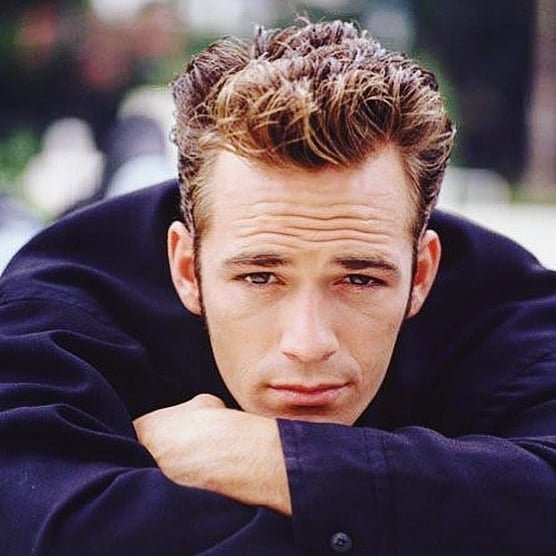 On Beverly Hills 90210 - the hit show of the 90s, the audience were lucky enough to hear the answering machine message of resident hunk Dylan McKay. Played by Luke Perry the message would say something like "Hey it's Dylan, you know the drill.... beeeep." It was like he was too cool to even leave a standard message. He was too cool for a lot of things.

The character of Dylan McKay was meant to be the bad guy. Perry was in his late twenties when he was cast to play a troubled teen. He was worldly, at such a tender age, he had beaten alcoholism and lived on his own. His father was in jail and his mother was a hippy.

In contrast, Brenda Walsh, a girl who had just moved to Beverly Hills from Minnesota comes along. She was part of a middle-class family who was suddenly set among the children of the rich and famous of LA.

Brenda, played by Shannen Doherty, who in real life has advanced cancer, was attracted to bad boy Dylan and there lay the plot for the first few seasons of the show. The disapproving family, Dylan's instability, and Brenda's loss of innocence had teens all over the world in a trance.

Luke Perry had swagger as Dylan, he modeled himself on James Dean. The hair, the walk, the look of not being phased by anything. He would take surfing trips to Mexico, had loads of money, knew some bad dudes and yet was jealous of Brenda's steady home life. Farewell and later Dylan, many middle aged women are mourning you right now because you were more than just a young crush: you epitomised teenage cool in the 90s and that means something.