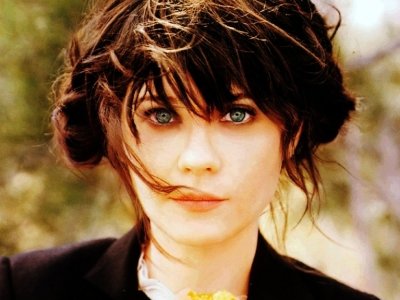 There are so many reasons you should love Zooey Deschanel! She's absolutely fantastic and she's seriously one of the most adorable women in showbiz right now. She's pretty much flawless in all she does, and she looks great while doing it! I think it's safe to say that Zooey's become everyone's "girl crush" lately, including mine! Check out some reasons you should love Zooey Deschanel!

Not only is she an incredible actress, but Zooey's got some serious pipes on her. She's part of an indie-folk band called She & Him. Her songs and music videos are as quirky and adorable as she is. She's got such a smooth, jazzy voice that you could just listen to for hours on end. This is just one of the reasons you should love Zooey Deschanel!

Zooey's acted in tons of movies, but my favorite role of hers has to be Jessica Day from New Girl. She's just so easy to relate to! As much as you hate to admit it, we all have some awkward, quirky, weird Jessica Day in us. But hey, Jess does end up with Nick Miller! This seems like the bright side to any situation. So, where's my Nick Miller?!

3. Her Sense of Style

On and off camera, Zooey's style is very old fashioned and retro. It sets her apart from the rest of Hollywood and is really refreshing to see! She's definitely the only one who can rock the looks that she does. She's just got such a sunshine-y outlook and she portrays that through her attitude. Does that make sense? I'd love to go shopping with Zooey!

Zooey co-founded HelloGiggles.com which is an awesome site to check out. It's run by comedic women who write entertainment and lifestyle pieces. It offers ideas on DIY projects, fun hobbies, and more! It's a place where women can get on and forget about whatever stress they had earlier. I love that Zooey takes her time to do this!

5. Her Friendship with Joseph Gordon-levitt

Oh how I wish these two dated. They met many years ago while filming the movie, "Manic" and became best friends! They even worked together again, 8 years later, on "500 Days of Summer". The most adorable thing about their friendship? Their YouTube covers! Zooey's posted a few covers with Joseph and it's just the cutest thing. My favorite is "What Are You Doing New Years Eve?" Go check it out!

Although Zooey comes from a long line of entertainment professionals (hello, her sister is the star of Bones!), she doesn't live such a lavish lifestyle. She opted out of buying a new car because she thought her mom's Volvo would do just fine! I love that she doesn't feel the need to flaunt her success. She works hard because she wants to and that's very admirable.

Let's be real, Zooey's a dork and we all love it. She's like the coolest dork there is, you know? The kind that you want to just be best friends with!

Well, there you have it! These are just seven out of many awesome reasons you should love Zooey Deschanel! After all, what's not to love? What's your favorite thing about her?