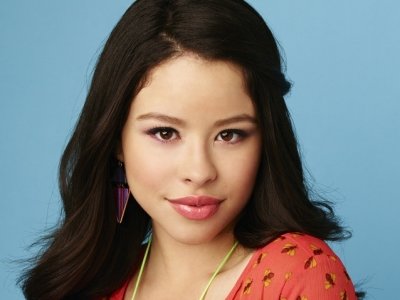 There are so many awesome reasons to love Cierra Ramirez. If you're a fan of ABC Family's "The Fosters", then you already know just how talented she really is. However, there's so much more to her than her hit TV show! This girl's got it all and she's going to take Hollywood by storm. Check out the reasons to love Cierra Ramirez and I have no doubt you'll be wishing she was your new best friend.

ABC Family's hit show, 'The Fosters' is just one of the many reasons to love Cierra Ramirez! On the show, Cierra plays Mariana - a girl who's got a lot more going on than meets the eye. Her scene-stealing scenes are a testament to her acting skills. P.S she stars alongside Maia Mitchell, and serious eye-candy, Jake T. Austin!

Cierra is truly stunning! She's always posting fun selfies on her Twitter & Instagram account (both @cierraramirez). When she gets glammed up for press events, it's not even fair how gorgeous she looks. I love that most of her selfies include a makeup-free face. It's so refreshing to see that and it's something all young girls should feel comfortable doing!

If you didn't already know this, Cierra's got some serious pipes on her. I mean, the girl can sing! She actually has some Instagram videos where she showcases her awesome voice. Personally, I like to think of her as a young Amy Winehouse - I think their voices are so similar! She's been working on some new music and is hopefully coming out with an album soon. I'd love to be able to jam out to her music.

4. She Loves Her Fans

Cierra's always trying to stay interactive with fans! Whether it be chatting with them via Twitter or even just updating them on what she's up to, she cares a lot for them. Whenever she runs into fans on the streets, she always poses for a photo with them. I think it's so sweet that she cares so much about her fans - it's definitely helped her fan base grow on a day to day basis.

5. She Loves Her Co-stars

I love when celebrities are genuinely friends with their co-stars. Cierra's constantly posting photos from the 'Fosters' set, where she takes selfies with her fellow cast members! My favorite is when she and Maia take photos together. Their friendship is so cute! They're always posting pictures together and sending sweet messages to each other. Oh, and of course I don't mind her selfies with Jake T. Austin and David Lambert!

Despite all of her success, Cierra's remained really humble and genuine. She acts like she could easily be your best friend and I just love those type of people! I love that she hasn't let the fame get to her head and I hope she never does.

Cierra's street style is awesome but when she gets glammed up for the red carpet? She always looks stunning! Kudos to her stylist.

Well, there you have it! These are just seven out of many awesome reasons to love Cierra Ramirez. She's definitely one of the most genuine people out in Hollywood and I'm definitely rooting for and her success! If you're a fan of Cierra's, what's your favorite thing about her?