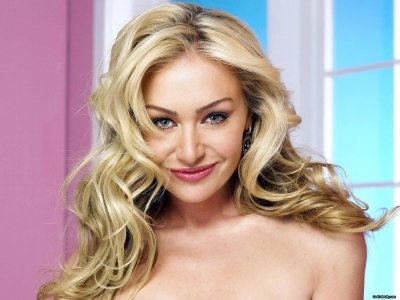 A fun fact about Portia de Rossi that she talks about in her memoir is that her birth name is Amanda Rogers. She never liked the name because it was too ordinary. How could she stand out if she had such a common name? In fact, she lost at a track and field event in her childhood to another girl who happened to be named Amanda Rogers. She chose the name Portia from Shakespeare’s “Merchant of Venice” and de Rossi for an Italian element.

You may know or have spent months stalking the DeGeneres and de Rossi marriage but did you know that Portia was married before? In 1996, Portia married filmmaker Mel Metcalfe with the hopes of getting an American green card. Her husband ended up cheating on her with her brother’s wife, which led her to reach rock bottom. Her sexuality aside, this was a painful time for de Rossi.

Portia de Rossi has been considerably public about her battle with Anorexia Nervosa. Her memoir talks about her struggle and road to recovery. Her book is an inspiration for anyone struggling to find comfort in knowing you're not alone and hope for recovery. Her account is riveting and according to the New York Times, “written with artistry, compelling insight and lucid frankness.” If you haven’t read her book yet, I suggest you do.

Portia openly talks about how scared she was to come out as a gay actress. She recounts in her memoir that “at least I’m not dating Ellen DeGeneres.” That type of attention would pull her right into the spotlight. She admits watching DeGeneres after she came out as the test to see how the public would embrace or disgrace an openly gay actress. The aftermath scared her as DeGeneres lost her show and went into a deep depression.

Portia de Rossi rose to fame in the American public with her roll as Nelle Porter on the 1990s hit TV show “Ally McBeal.” This witty law show portrays ridiculous case after case. She also stars as Lindsay in the interesting show “Arrested Development.” I had to laugh because she talks about how traveling with Ellen always elicits numerous fans who line up to take photos with her. One time in Italy during a similar situation, a woman wanted to take a photo with Portia and afterwards said, “I’m not exactly sure who you are but my friends say you’re incredibly famous.” I always have to laugh when I think about that story.

If you don’t think that Portia and Ellen are the cutest couple then maybe this story will change your mind. To surprise Portia on Halloween, Ellen hid in the pantry and waited to scare her wife as she tweeted the entire event. After hours, the maid left and Portia still had not come to find Ellen. Ellen texted Portia finally to help her get out of the pantry. Apparently, Portia was hiding in the closet waiting to scare Ellen at the same time Ellen was in the pantry. They are so perfect for each other!

Portia de Rossi is an incredibly beautiful and all-around talented individual. I think there are so many interesting, fun facts to learn about her. What are some other fun facts about Portia de Rossi?