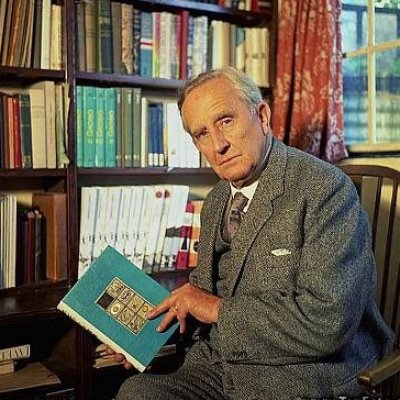 Described as the “Father of Modern Fantasy Literature”, the man we know by his initials was born John Ronald Reuel Tolkien on January 3, 1892 to British parents in South Africa. He moved to Birmingham in England in 1896.

He settled into an academic life working for the Oxford English Dictionary and doing translations as well as writing. His “wordy“ careers were interrupted by both World Wars. In WWI he fought on the front in France but in WW2 he had a desk job as a code breaker. After the war’s end Tolkien reentered the world of literary academia becoming professor at Merton College, Oxford University where he developed a strong friendship with another fantasy writer, C.S. Lewis (The Chronicles of Narnia).

Whatever else he accomplished in his life, Tolkien will be forever known for his incredible literature – namely the novels set in the fantasy world of Arda, and most notably, Middle Earth - these being, The Hobbit, The Lord of The Rings Trilogy and The Silmarillion. The Hobbit was originally written as a story for children - his own – but also attracted an adult audience. The Lord of The Rings Trilogy however, proved to be a towering epic and set the world on fire for fantasy works.

The Lord of The Rings is cited by a great many sources as being one of the most important and influential works of 20th Century literature and the books regularly appear in the top five of lists of the “best loved” and “most favorite” polls in countries all around the world. And thanks to Peter Jackson, we get to enjoy them in movie form too.

Happy Birthday to you too, if you were born on January 3rd.