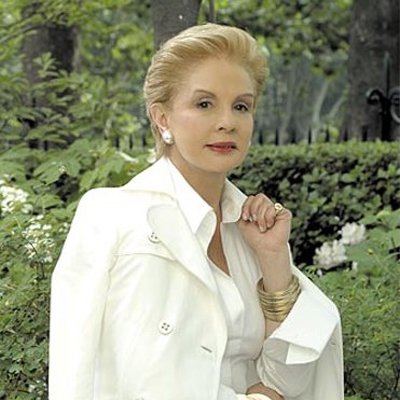 Carolina Herrera was born on January 8, 1939 in Caracas, Venezuela.

Not many names in the fashion industry become well known enough to enter in to mainstream pop culture, but it would be fair to say that Carolina Herrera is certainly one of them. A Venezuelan-American fashion designer, Herrera has been long regarded for her own exceptional personal style as well as having dressed some of the world’s most important women in her decade’s long career. Her presence in the fashion industry really kicked off in 1981 when she was encourage by an influential friend at Vogue to design a clothing line, which was met with much critical acclaim when it debuted at Manhattan’s Metropolitan Club.

The strength of Herrera’s reputation in the business has remained constant for decades thanks to the caliber of clients that she has consistently attracted throughout the years. She has designed dresses for Hollywood royalty to social royalty ranging from Renee Zellweger to Duchess Diana de Melo, but perhaps her most famous fashion partnership was with former First Lady of the United States of America, Jacqueline Kennedy Onassis. Not only did Herrera dress Onassis, but she was also commissioned to create a wedding dress for her. Carolina Herrera’s relationship with the White House has continued in to recent times, with current First Lady Michelle Obama also being a client. Her simple, elegant creations are deemed to be the perfect match for women in high profile positions.

Trivia:
Carolina Herrera is a passionate humanitarian, and has served as a Goodwill Ambassador for the Intergovernmental Institution for the use of Micro-Algae Spirulina Against Malnutrition.

Happy Birthday to you too, if you were born on January 8th. Here’s who else you share your birthday with: