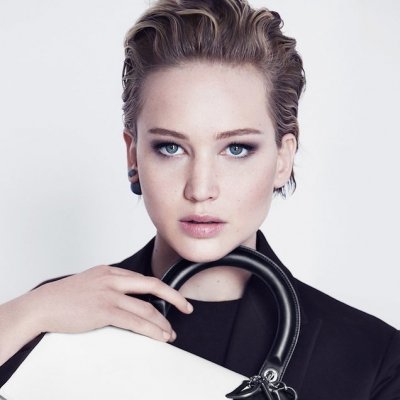 The Hunger Games' leading lady looks absolutely breathtaking in a new Dior campaign, of which she is a spokesmodel for. In the first picture, J.Law stares right into the camera - and into all of our souls - wearing a silver chain with sea-green and turquoise accents, a color not unlike her beautiful eyes!

The second picture shows off her entire outfit which consists of a sleeveless white crewneck top that's tucked into a black mini skirt. The cobalt blue purse completes the ensemble and I have to say, she looks FIERCE! I would totally buy everything she's wearing.

The two final pictures are black and white (doesn't everything just seem so much classier in B&W?!) and show J.Law wearing a black dress with a white lace collar and a black and white cut-out printed dress, respectively.

What do you think of Jennifer's latest campaign pictures? She was named a spokesmodel for the brand back in 2012 and earlier this year, she extended her contract with Dior for another three years!