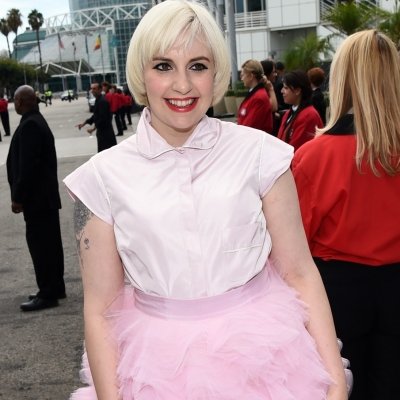 Lena Dunham is a rather polarizing figure anyway. People typically have very strong feelings about the “Girls” star – they either love her or hate her, there's no middle ground. Not so surprisingly, her interesting look for the 2014 Emmys has sparked the same amount of controversy.

The pink ombre skirt is an explosion of ruffles, and in theory it could be pretty … but it doesn't quite make the leap. I'm not sure what it is. It's a little too full, I think, but with the right top, it still might have worked. The button-up blouse with Peter Pan collar, all tucked in? Not the right choice. The skirt comes up too high and it falls too low, and it ends up looking like a lot of fabric that simply doesn't sit right on Lena's frame. Really, I just can't get over the top, or the skirt's waist. Those kill me the most, I think. If you watched her red carpet walk or saw footage, you'll understand why I also cringe in sympathy at how hard it was for her to walk.

It's hard to believe that a Giambattista Valli ensemble could go so wrong. That being said, I actually love her platinum 'do, and I was even a fan of the old school glam makeup. However, in the wide, judgmental world of the internet, the outfit's getting all the attention. Notably, people are comparing her look to Ace Ventura, cotton candy, a toilet paper doll, and a Pinterest ruffle cake. What do you think of Lena's outfit, though? Did it work for you?