7 Reasons Ashton Kutcher and Mila Kunis Are the Perfect Couple ... 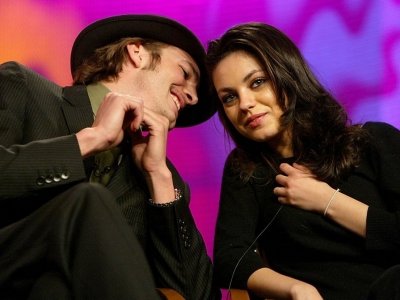 There are so many reasons why Ashton Kutcher and Mila Kunis are the best couple around! I can't even describe how badly I wanted them to end up together. I mean, didn't all '70s Show fans want that?! They seem genuinely happy together and it's so cute to see that. They've been dating for the past two years and seem to fall in love with each other more and more each day. Check out some of the reasons why Ashton Kutcher and Mila Kunis are perfect together!

In case you've been living under a rock and were completely unaware of this, Ashton Kutcher and Mila Kunis starred in That '70s Show together more than ten years ago! That's a lot of history to share with someone. The two played Jackie and Kelso, the couple everyone was rooting for. Unfortunately, they didn't end up together on the show, but we got the happy ending in real life! I think that's so cool!

Let's be real, the sooner a guy comes to the realization that his girlfriend is smarter than he is, the better. LOL, am I right, ladies?! Ashton Kutcher has no shame in telling people his love, Mila Kunis, is a lot smarter than he is. That's exactly what he told Elle Magazine in an interview he did with them!

3 They Go on Dates

I love that they keep their relationship fresh by constantly going out on dates together. Not just romantic dinners, but fun activities like basketball and baseball games! They recently ended up on the "Kiss Cam" and lovingly obliged. Ashton even posts pictures on his Instagram account of the two! It's so sweet to see how much he loves her!

Mila is a self-proclaimed "computer nerd" and Ashton is really into the whole technology scene. Let's not forget that he even played the role of Steve Jobs recently! Ashton is on Twitter but unfortunately Mila is not. Maybe she'll change her mind soon? Fingers crossed!

An obvious reason why they're so perfect together? They're engaged! After dating for two years, the two decided to take it to the next level. Here's why I wish Mila would join Twitter... so she could share wedding plans! How awesome would it be to know cool wedding details?! I don't think they're the type to have their wedding televised or anything, but I can't wait to see pictures of it!

This is such exciting news! The two are expecting their first child together! Can you just imagine how BEAUTIFUL that child will be? It's really not even fair. I'm also super excited to see baby pictures! That won't be for a while but it's still exciting, right?! They both have somewhat unique names, so that makes me wonder what they'll name their child! Any ideas?

7 They Look Amazing Together

There's something about being in love. Whenever the two are pictured together, they both look radiant. It's so cool to see that! They're definitely two of the most beautiful people in Hollywood, so I supposed that helps, too!

Well, there you have it! These are just seven out of many reasons why Ashton Kutcher and Mila Kunis are the best couple around. They are just too cute! What do you love most about them? Are you excited for their wedding?