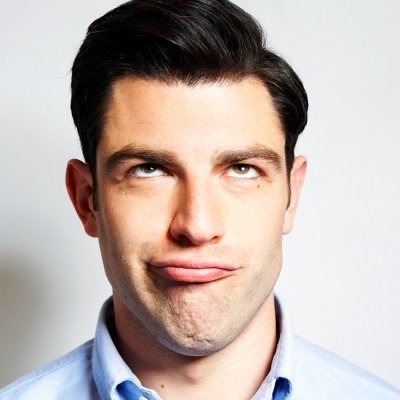 I mean, must I even explain? New Girl is my all-time favorite TV show. Max plays the notorious Schmidt and even though his character can be a bit crass, Max makes you fall in love with him. I also love the chemistry that the whole cast has with one another. This is just one of the many reasons to love Max Greenfield!

Max is always interacting with his fans on Twitter and he loves to make them question everything he says... "I love Twitter. My favorite thing to do these days is to Tweet things that seem very questionable as to whether I'm joking or not," he said. That's my favorite part about following him on Twitter - you never know what he's going to say! He also tweets Jake Johnson (a.k.a Nick Miller) all the time so that's a huge bonus.

3. He Loves His Fans

I actually met Max at the Fox Fan Front earlier this year and he was the sweetest person ever! He graciously posed for pictures with his fans and even made a bunch of silly faces in the photos. To be honest, I mainly attended the Fan Front to see the cast of New Girl and I'm so happy that I got to meet Max!

Have you ever watched his interviews on YouTube? If not, go do so and be prepared for some laughs! Max has such charisma and you can't help but smile when he's talking. He even manages to channel Schmidt so perfectly: "My own personal sense of humor at times really takes over Schmidt, and sometimes it works and sometimes it’s a little much, but for the most part if I continue doing that at least I’m making myself laugh,” he says. “And therefore being in the head of Schmidt is not too difficult.”

Like Schmidt, Max is very in tune with the style trends. Whenever he attends red carpet events or press junkets for the show, he always looks so handsome! He manages to look sophisticated and very well put-together. If only more men dressed like him!

Max gets major cool points for being such a huge fan of the Girls star. When he was asked who he would love to see guest-star on New Girl, he answered, "Lena Dunham! Not only do I want Lena Dunham to play my love interest, I would fly out to New York to do whatever she wanted me to do on Girls." LOL - these two would be perfect together and it would make for some comedy gold.

Despite his major success, Max is still the kind of guy you can be best friends with. He hasn't let the whole "fame" thing go to his head and seems like one of the most sweetest and genuine guys in the business.

Well, there you have it. These are just seven out of many awesome reasons to love Max Greenfield. With his charisma and talent, I have no doubt that he'll be successful in this industry for years to come. If you're a fan of his, what do you love most about him?