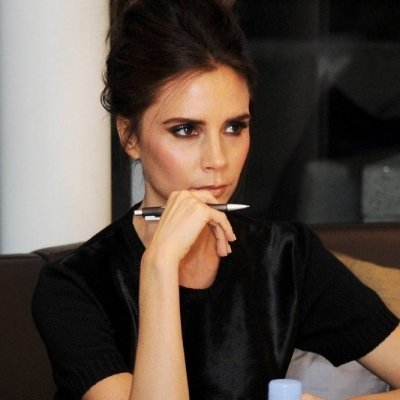 One of the admirable facts about Victoria Beckham is how she has successfully changed direction and forged a new career in a different sphere. Few people would have thought she would ever be taken seriously as a designer, but she is now very well regarded in the fashion world. Not bad for a singer in a girl band, is it?

Many celebrity marriages barely make it to the one-year mark these days. So the fact that Victoria and David have just celebrated their 15th anniversary is quite an achievement. They've also managed to bring up their four children without putting them too much in the spotlight.

Of course there are rumours - it's only to be expected - but there has been no scandal that can be substantiated attached to Victoria's name. She and David are a devoted, hard-working, family-oriented couple. You don't see them drunk in bars or taking drugs. There are a lot of young celebrities that could learn a lot from following her example and dedicating themselves to work and family.

Admittedly, some of the outfits Victoria has worn in the past are pretty frightful. These days, though, she's developed a simple, elegant style that suits her very well. She doesn't flash too much flesh or wear loud clothes. She's never seen looking less than stylish or dressing as though she were decades younger. It's simple, smart, and it suits her.

Not only did Victoria do well for herself as part of the Spice Girls, but she's made quite a bit of cash through her fashion business. Her estimated earnings for 2012 were a massive $25 million, and between them she and David are worth a massive $200 million. That's doing pretty well in anyone's book.

When news broke of her foray into fashion, nobody would have put money on Victoria being seen as a credible designer. Yet she's now fully accepted by the fashion establishment, and even acclaimed. So you've got to hand it to her for persisting and creating a successful business.

Victoria also does a lot for charity. She has donated hundreds of items of clothing to be sold for charity (theoutnet.com). Admittedly, Victoria's closets must be huge, so she probably won't miss those items. But it's still a nice gesture to help raise awareness of a small charity. And the Beckhams do a lot of other charity work as well.

Victoria gets a lot of negative press that she doesn't deserve, sniping over the fact that she rarely smiles in public and presuming that she has no real input into her designs. But I think she comes across as a decent person and a good mother, and I like her style. She's achieved a lot, behaves in a gracious manner, and doesn't court publicity. Do you think that Victoria deserves her fashion success - would you buy her dresses?