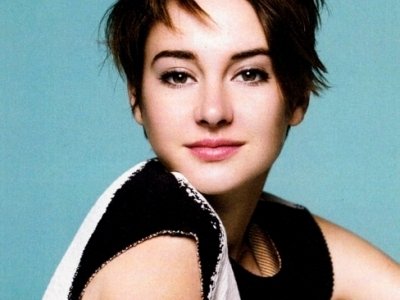 If you’re interested in getting to know the Divergent star a little better, take a look at some of these fascinating facts about Shailene Woodley. The 22-year old actress is passionate about living healthy, her natural lifestyle and as you have probably heard, some pretty peculiar beauty secrets. Get better acquainted with the young actress and what makes her tick with these seven facts about Shailene Woodley.

One of the little known facts about Shailene Woodley you might like to know is that she began commercial modeling at the young age of 4. Soon after that, she began getting acting roles and she made her debut on the small screen in the TV movie Replacing Dad in 1999, followed by other roles in television series, including The O.C. and Crossing Jordan.

2. She Was Diagnosed with Scoliosis

At the age of 15, Woodley was said to be diagnosed with Idiopathic Scoliosis and wore a plastic chest-to-hips brace for two years in order to straighten her spine. Woodley told WebMD that her spine had a 38 degree curvature and while she was pretty bummed about having to wear a brace for 18 hours of the day, the treatment was clearly successful and she was able to take it off for good in December 2008.

Woodley is well known for her roles in The Secret Life of the American Teenager, The Descendants and Divergent, but she’s auditioned for other blockbuster roles as well. Did you know that she auditioned for the part of Cosette in Les Miserables and was considered for the role of Katniss in The Hunger Games? She was also cast as Mary Jane Watson in The Amazing Spider Man 2, but her scenes were cut! Do you think she would’ve made a better Katniss than J-Law?

If you’ve ever taken a peek at her Twitter feed, you’ll immediately be able to tell that she’s all about light, love and positivity. She frequently tweets positive affirmations and retweets quotes and articles by author and motivational speaker Danielle Laporte. You can get a good idea of the healthy foods the actress eats by checking out her tweets, also!

In case you weren’t already aware, Woodley has been cast as Hazel for the film adaptation of The Fault in Our Stars by John Green. The character in the book has very short hair so there was a lot of buzz about whether Woodley would wear a wig or cut her hair. The charitable actress decided to cut her hair and donate it to the Children with Hair Loss charity. It doesn’t stop there, she and TFIOS author, along with the movie’s producer, saw this as an opportunity to get more people to donate hair to charity and started Hair for Hazel.

6. She Believes in Natural Remedies

If you’ve read about Woodley’s affinity for living an alternative lifestyle, you probably know that the actress likes to partake in oil pulling, consuming clay, taking herbs, washing her hair monthly and using only natural skin care and beauty products. Woodley says she’s been an environmentalist since she was in high school and says she even makes some of her own beauty products.

Even though Woodley is a bona fide star, she still has actresses that she looks up to too. She says she’s a big fan of Kate Winslet, Marion Cotillard and Melanie Laurent. She worked with Kate Winslet in Divergent. I wonder if she’ll work with either of the two actresses she admires in the future. Who would you want to see her work with?

I hope you learned some new things about this young actress. I think she’s a breath of fresh air and it’s great that she’s spreading awareness about the environment and working with various charities. Are you a big fan of Shailene Woodley? What kind of role would you like to see her take on next?