The Time I Met the Duplass Brothers ... 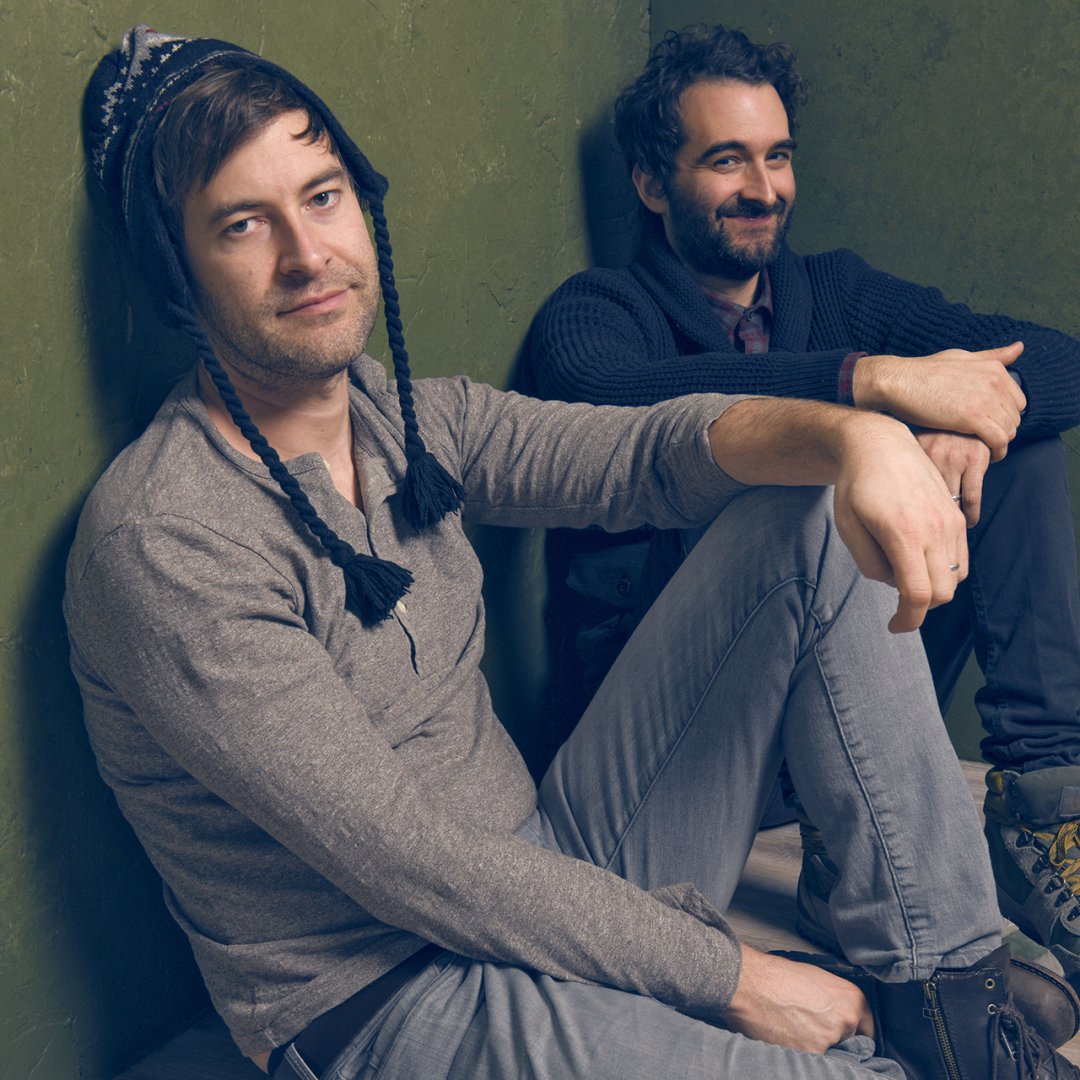 It was a fall night. Not too cold or too warm. The weather was just right. That's the scene for the time I met the Duplass brothers.

Only, I am not here to tell you about the weather from the night I met three of my favorite filmmakers in the entertainment industry. No sir or madam!

November 15th, 2016 was a bad and good day for different reasons. About two months prior to this day, I found out that I needed a biopsy on my thyroid. Thankfully, it was negative, but at the time, I went to bed angry and upset.

I woke up feeling the same way.

Something that kept me distracted was my social media creepin’ (yeah, so WHAT) with filmmakers, Mark and Jay Duplass. The Writers Guild of America, West had just released an upcoming panel that the Duplass Brothers and writer/director, Sean Baker, of the Sundance breakthrough film, Tangerine, were going to speak at. I saw the tickets page and it was sold out by the time I checked. However...

Little to my knowledge, my mother, who knew my cray slight obsession with the panels where behind-the-scenes peeps from writers, directors, and producers speak at, beat me to the punch. She had purchased general admission tickets just days prior to the event, but she did not tell me until the day of.

After my biopsy, which my mother attended with me (she had her thyroid removed when I was a baby and we both felt it was best if she came to the procedure), we went to breakfast. It was still early. I still confused, scared and angry over the biopsy.

Looking back, I feel a bit horrid because I will be honest about my mood post-biopsy. I was the biggest Debbie Downer. Straight up, I was bitchin’ over everything and I mean EVERYTHING.

About midway during breakfast, after a pep talk with my mother (which is always refreshing), I brought up that WGA, West Duplass Brothers, and Sean Baker event. I was telling my mom about them and what projects they had worked on. Just as her sudden interest in them spiked my curiosity, and before I got to ask, she finally said, “I can’t keep this in any longer.”

That was the moment when she broke the news of purchasing those two tickets about a week or so ago. I was shocked and it paralyzed me from speaking. But there was more. She then revealed to me that a few hours after purchasing general admission tickets, the manager or whoever was selling them, had reached back out to her. He told her that two VIP tickets were available for upgrade.

And that was when she told me I was going to meet the Duplass Brothers and Sean Baker.

I probably blacked out for a second or two. To be honest, I sort of do not remember exactly what we said or spoke about. All I recall was popping in Tangerine as soon as I got home, followed by another repeated watch of Safety Not Guaranteed, (the director whom Steven Spielberg would later scout and recruit on to direct Jurassic World). So, you can see my passion for independent film making. You just DO IT and get it done no matter what happens.

That is what I picked up from the Duplass Brothers.

So, what was it like to meet three peeps whom I basically idolized?

It was an interesting experience too, considering that the VIP tickets were a selection of twenty people. That meant it was a guarantee to get the opportunity to chat with them. And BOY DID I!

But I do want to chime in for a moment that the OTHER ironic part of meeting someone (or multiple someones in my scenario) is that you have this ideal fantasy of some sort on how it will go. Yeah, I was still trippin’ a bit from the biopsy. The night before I struggled to fall asleep at a decent hour. Then, I also refused to take a nap before attending the WGA, West event in, oh, t-minus five hours post-biopsy. And when you add in nerves, more nerves, panic, excitement, and all the stages of emotions that one goes through prior to meeting their idols, it was tough.

Yeah, it was even a bit cooler.

The first Duplass brother I met was Mark! The VIP room had its doors open for a good thirty minutes before the brothers arrived. I was standing by the food table, aka where the alcohol was, before I saw Mark from the corner of my eye.

I blurted out, “Hey, Mark!” And yes, probably more eager than intended. But he was rad and said, “Hi,” back. He also got excited when he realized there was alcohol there too.

It was a fuckin’ awesome moment that I will forever cherish.

Mark then made his way around because everyone was sort of hounding him with the common questions of, “How did you guys do it," "How did you get your first feature films made," "Are you hiring,” etc. Therefore, it made me a tad anxious to try and strike up a more one-on-one conversation with him. But it was thoughtful of him because these multiple questions from everyone at once got him talking. He started giving us filmmakers advice, even re-quoting that famous line he said about a year prior to this WGA, West event, “You are going to be financing your first two features. I know, it’s going to SUCK. But you will accomplish it. You will do it.”

So, it got me more nervous and I grabbed a glass of wine (my second).

Somewhere, in between, my mother tapped on my shoulder and told me that “the other one” was present and only chatting with a few people.

“You mean Jay Duplass,” I corrected her.

It was a bit surprising to see Jay only a few feet from the circle around Mark. Jay must have arrived later, but by damn, I knew I had to introduce myself. Especially when the couple who was talking to him stuck out their hands to say goodbye.

I finished the rest of wine and circled around. To not be obvious, of course. Some other Duplass brother admirer beat me to the punch by getting to Jay first—shitfuckdamnit! However, I was determined to meet one of them and get the chance to chat. So, I waited. Oh, boy, did I wait.

Jay saw me and said hi somewhere during the conversation with the line cutter (I mean [INSERT non-petty comment here]). Jay was awesome too, because, like Mark, they truly took the time they had to get to know their fans and other filmmakers. That was something I took away after meeting them as well. They treated their fans as colleagues, wanting to hear what they were working on.

The most interesting part of meeting Jay was how humble he was. He had just started acting on the now famous TV show, Transparent. When the dude/line-cutter left to grab another drink, I stuck my hand out to introduce myself to Jay. He was very cool. So, I told him that he and Mark were “Fuckin’ awesome.” Hint the picture attached of us two, a candid moment that thankfully my mother took. I still think it is a cool photo, especially knowing what the hell I just said to him. 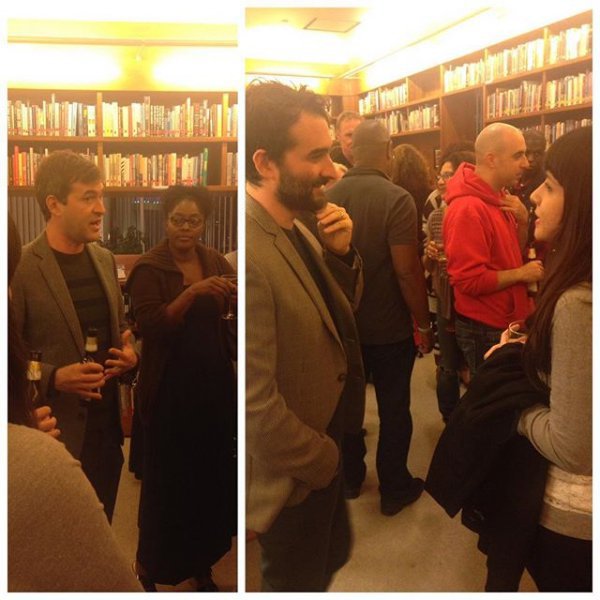 I had the opportunity to talk to Jay for a few minutes. He asked what I did. I gave him a brief rundown of what I was working on. Like Mark, he told me to not self-doubt and to continue and shoot what would officially be my second short film. It was one of those, “Hit it hard and keep running,” advice tips. And then others started to realize that he was present and rushed up to him.

It was only five or so minutes until the theater ushers had announced to the VIP (Mark and Jay included) that it was time to head upstairs. It was time for the Q&A with the third guest, Sean Barker.

It was truly spectacular! To hear the history behind Tangerine, which the Duplass brothers are producers for. I had the opportunity of meeting with one of the other producers about a year or so prior to this WGA, West event with Sean, Mark, and Jay. I sort of knew the history of Mark, Jay, and Sean being colleagues from back in the day.

Mark even told the WGA, West crowd that night how he "found" Sean Baker when his earlier feature, Prince of Broadway, was submitted to the Woodstock Film Festival. Mark was one of the guest judges. He claimed how he chased down Sean and sort of took him under his wing.

I thought that was fuckin’ dope!

The coolest part of the event too was meeting Momma and Papa Duplass. Sometime during the VIP networking part (pre-Q & A panel), my mother pulled me aside and said, “Quick!”

Almost dragging me to an elderly couple in the corner.

They were very sweet! Momma Duplass took a hold of my arm and told me, “Your mother told me that you’re also a writer and filmmaker.”

Their parents are humble and genuine people. They spoke highly of their sons, sharing stories about how Jay and Mark were always going to the extreme just to make a movie. It was so relieving to hear because Mark and Jay TRULY DID work their way from the ground up while balancing their day job, they were prepping for their next film. And while prepping for their next film, they also had a wives and children to support.

It was a much needed discussion.

My mother and I also sat next to their parents during the Tangerine Q & A panel.

It is still a running joke until this day - my mom hitting it off with Mark and Jay’s mom and dad. Yet, she did not tell me until after the WGA, West event how their parents wanted to grab lunch with her.

Low key, I joke to my mom how she just needed to “pimp” me out. Yeah, I sort of have a twisted humor at times I guess.

As soon as the Q & A ended, another swarm of people surrounded Sean, Mark, and Jay. It was obvious they were getting pitched ideas for movies, television, and all. They were kind though, having to give what most up-and-comers truly despise to hear, “That’s awesome! But we can get into some legal trouble if we do look at your script, even though it sounds interesting.”

Again, I had the chance to speak with all three of them (see the pictures with Jay, Mark, and the Q & A moderator, Kirsten Smith, who also has a list of impressive credits. She wrote popular hits and cults like Legally Blonde, She’s the Man, The House Bunny, and Ten Things I Hate About You, and more). She was awesome! It was cool to see the guys speak so highly of her as well, making sure that she had her moment of recognition throughout the Q & A panel. 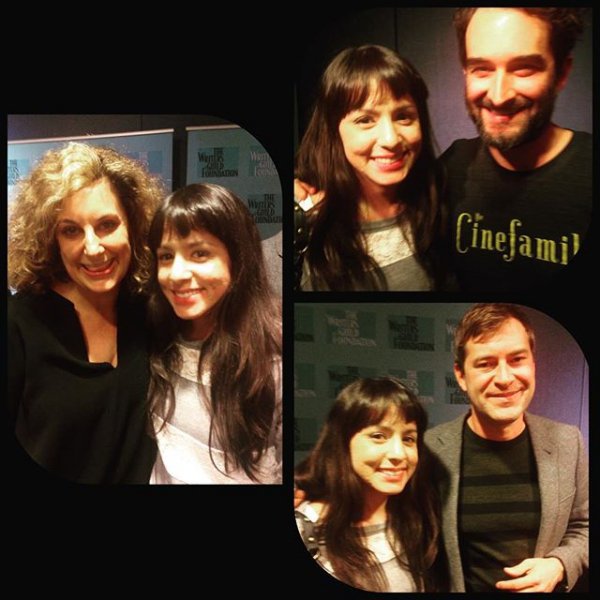 So, my two cents on these sort of networking events (especially for writers and, overall, filmmakers) is to just GO.

It can be difficult at times because often these events do cost (the other day, I spent $50 on an upcoming panel with producers from different network TV shows). However, it is WORTH it if you just put yourself out there and go in and introduce yourself. You never know who you will meet and what kind of advice and conversations you will have.