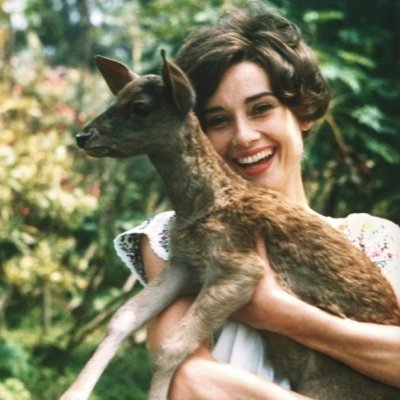 There’s no argument that celebrities have bucket loads of money, so it’s no wonder that there are so many great, unique celebrity pets. Some of these pets are just crazy, and it just goes to show what money can buy! If you were rich, wouldn’t you buy an exotic pet too? Let’s take a look at some unique celebrity pets you may not have heard of.

First on this list of unique celebrity pets is a beautiful fawn called Pippin (otherwise known as ‘Ip’) that belonged to the classically gorgeous Audrey Hepburn. She met the fawn on the set of Green Mansions and fell in love right away. The two got along perfectly, and so Audrey made Pippin her pet.

We all know the famous tiger belonging to boxer Mike Tyson in the Hangover movies, but did you know that was actually his real pet - or that he owned not one but two others? Keeping these tigers was not cheap, setting him back $1,500 each per day, just for food! Eventually, however, the tigers became too much for Mike and he sold them.

Megan Fox claimed that her cute pot bellied pig, Piggy Smalls, stopped her from eating pork, but this adorable duo didn’t have an overly happy ending. Megan gave away Piggy Smalls, after he apparently became “too sexually aggressive.” Yikes!

Leo bought his giant tortoise at a Reptile Breeder’s Conference for $400 back in 2010, upon asking for “the biggest tortoise they had.” The tortoise is already 10 years old now, but he’s expected to outlive Leo and make it to 80! I couldn’t find anything that told me what Leo has named him, but no doubt it’s something wonderful! Any ideas?

Apparently, Hollywood bad boy Charlie Sheen is a reptile man! He has many lizards, including one water dragon called Hopper Jr. Just as with many other things in his life, his pets cause a lot of controversy due to claims he has left some to die.

Kirstie Alley has come under fire for her unusual pets - a collection of lemurs. Many animal rights activists have slammed her for keeping wild animals as pets, which is understandable. However, they certainly aren’t doing it tough - Kirstie spends a whopping $40,000 per year on them! She hires two zookeepers to look after them.

How can you not love adorable donkeys? Reese Witherspoon is a self-confessed donkey lover, and owns two miniature ones, called Honky and Tonky. She has recruited her kids to help her look after them, and these donkeys are just two of the large collection of farm animals she owns!

While crazy Surrealist Salvador Dali is known for his pet anteater, it turns out it wasn’t, in fact, his pet. He did, however, have an ocelot, which he took into a fancy restaurant one day. A lady in the restaurant was outraged that such an animal should be let into the restaurant, to which Salvador Dali replied that it wasn’t a wild animal, it was simply a house cat that he had painted to look “op-art.” She believed him!

Only Tori Spelling would have a gorgeous fluffy Silkie Bantam Chicken called Coco Chanel. Coco sleeps on a luxurious dog bed in Tori’s bedroom and dresses in outfits that colour-coordinate with Tori’s. Coco loves rides in handbags and Tori says that she’s “the boss” of the household!

How crazy are these celebrity pets!? I am a huge animal-lover, so I love hearing all about the pets that celebrities have. I bet they all get spoiled rotten! I bet there’s a lot of advantages to having an owner who’s as rich as these people! Do you own an unusual pet? What is it?