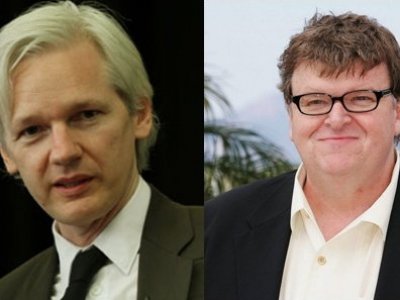 Michael Moore has come to the aid of WikiLeaks cofounder Julian Assange who is currently held up at a British jail. The filmmaker has coughed up $20,000 to pay the bail amount for Julian who is currently being held on sex charges for which Swedish authorities had issued an international warrant.

"I'm posting bail money for J Assange today. I wont [sic] stand by and be a witness to a railroading," Moore tweeted.

Michael added on his blog that lawyers for the government provocateur showed the judge a letter from him stating that he would back the bond.

"I am publicly offering the assistance of my website, my servers, my domain names and anything else I can do to keep WikiLeaks alive and thriving as it continues its work to expose the crimes that were concocted in secret and carried out in our name and with our tax dollars," wrote Moore.

"I support Julian, whom I see as a pioneer of free speech, transparent government and the digital revolution in journalism," Moore declared to the court.

Julian though will not be released from jail just yet, as the Swedish prosecutors have challenged the bail decision. As such, it could take up to two days for him to be released.