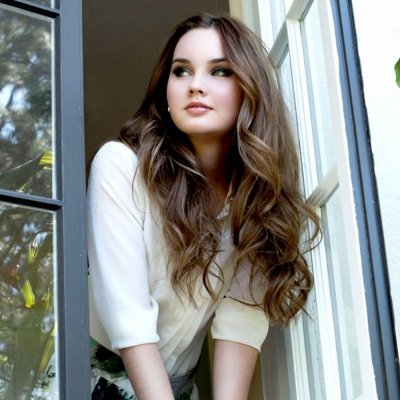 There are so many awesome reasons to love Liana Liberato. She's one of fresh faces of Young Hollywood and even though she's been in the movie biz for quite some time now, I think she's finally getting the attention she deserves. I'm a huge fan of hers and can't wait to see all of her future projects! Check out some of the reasons to love Liana Liberato and then let me know what YOU love most about her.

I can't even begin to explain how excited I am for this movie! It's due out this fall and if you didn't already know, it's based on a novel written by Nicholas Sparks. That means it'll be a love story we can never forget! I actually just bought the book a few days ago and I can't wait to read the story about Amanda and Dawson's love. Liana plays a young Amanda and you can watch the trailer on YouTube. This movie is just one of many reasons to love Liana Liberato!

Liana recently starred in the movie adaptation of Gayle Forman's "If I Stay," alongside Chloe G Moretz and Jaime Blackley! It looks she's in all the major films, huh? I watched the movie recently (and bawled my eyes out of course) and was so captivated by Liana's acting. Even when she's not the lead in a film, she manages to steal the scene!

Liana is constantly showing love to her fans on social media. She's always posting fun behind-the-scenes moments from set which are a true treat to see! I love the fact that she acknowledges all of her supporters - I really hope I can get meet her during the press tour for The Best Of Me!

To state the obvious, Liana's SO beautiful. She's just that type of person that radiates positivity and seems like she'd be such a joy to be around. She seems like one of the most kind-hearted spirits in the movie industry and that's really refreshing to see.

When Liana gets all glammed up for red carpet events, it's not even fair how good she looks! She's such a fashionista, no matter what she's rocking. When she's off-camera, she tends to keep things makeup-free which I think is awesome. It's such a great message to send to other young girls - it's okay to go bare!

Instead of listing all her movie roles, I'm gonna sum things up by saying she's incredibly talented. One of my most recent favorites is the movie, Stuck In Love. If you haven't already watched it, you can do so on Netflix! It stars many big names and Liana did such a fantastic job in it.

It's pretty hard to find a name in Hollywood that hasn't been attached to some type of scandal. Well, Liana's one of those people. She has a good head on her shoulders and works hard for everything that she wants. She knows how to have a good time without having to resort to anything reckless!

Well, there you have it. These are just seven out of many awesome reasons to love Liana Liberato. I think she's such a fantastic actress, great role model, and is definitely going to go far in this industry. If you're already a fan of hers, what do you love most about her?