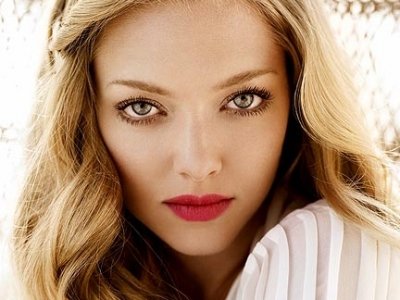 Let's be real - there are countless reasons to love Amanda Seyfried. I mean, is there a human being who's more flawless than she is? Nope, didn't think so! She has major BFF potential, and you'll see why. Honestly, if I ever saw her walking down the street I think I'd ask her right then and there to be my new BFF. Would that be too creepy? Hmmm. Check out the reasons to love Amanda Seyfried!

Back in 2012, Amanda showed off her rapping skills on The Ellen Degeneres Show. She wore a frog's head and rapped 2PAC's "California". Yup, this is definitely one of the awesome reasons to love Amanda Seyfried. She's a rapping frog and I love it. Fingers crossed that Amanda goes back on Ellen's show for another rap session. That'd be pretty epic.

2. She Uses Some Liquid Courage

Amanda isn't afraid to tell people when she's drunk! Haha! She appeared on David Letterman's show and let him know that she had some liquid courage before getting to the stage. She told David, "I have to go on record saying i've never done a live television show -- after noon -- without some kind of liquid courage." I mean, with her job, that's pretty easy to understand! I love how candid she is about everything!

3. She's Obsessed with Her Dog

If you're a fan of Amanda, you're a fan of her dog, Finn. He even has a Twitter account with 12,000 followers. I might be one of them.. Oops. Amanda is ALWAYS uploading pics of Finn, he's pretty much her baby. I love how close she is to him because I'm just as close to my dogs! She even took him to the David Letterman show so he could show off his tricks!

If you're looking for a girl to hit the town with, Amanda's your girl! She's admitted to being a fan of lap dances and especially from hunky former co-star, Hugh Jackman. Hugh gave Amanda a lap dance at her 27th birthday party! I mean, what's a better birthday gift than that? Maybe if you were BFFs with her, Hugh might come to your birthday party too!

How cute are Amanda and Justin Long together? I can't even handle it! They're definitely one of my favorite couples. Oh, and if you creep Finn's Twitter account, you'll find some super cute photos of him and Justin. Yup, Finn the dog's Twitter account. I hope these two end up getting married! It seems like they're really happy together.

I love that Amanda is a risk-taker. She's been maturing as an actress and her latest film, Lovelace was a major success. Of course, it was also a major risk to be portraying a famous porn-star. Amanda managed to still keep the movie classy, while telling a very important story. I'm excited to see what other roles she takes on in the future!

Amanda is beyond talented. She's grown so much since being her role in Mean Girls! She's starred alongside some of the best actors, and every movie with her is a success! Not only is she an amazing actress, but this girl's also got a set of pipes on her. She's a fantastic singer! She's been featured on the soundtrack of Mamma Mia, Dear John, Little Red Riding Hood, and of course Les Miserables. I love that she incorporates both her talents into one career.

Well, there you have it! These are just seven out of many reasons to love Amanda Seyfried. She might just be my favorite person, ever. What do you love most about her?