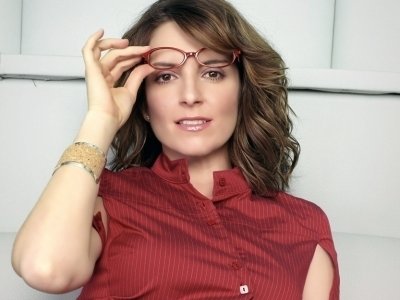 1 She's Not Afraid of Being Powerful

Tina's not afraid of NOT following the pack. She'd rather lead it! That fearlessness is what landed her the position of first female head writer at Saturday Night Live! She rejects the notion that "women aren't funny" and tells girls to follow their dreams! In her New York Times Best-selling book, Bossypants, Tina goes on to talk to women in the workplace. When faced with difficulties, ask yourself, 'Is this person in between me and what I want to do?' If the answer is no, ignore it and move on. Your energy is better used doing your work and outpacing people that way. Then, when you're in charge, don't hire the people who were jerky to you." Great logic. This is just one of the reasons to love Tina Fey!

2 She Roots for Other Women

Tina is not about tearing other women down. It would've been easy for her to see SNL alum, Amy Poehler, as competition. Instead, the two became BFFs. They even host award shows together and let me tell you, they're the funniest pair to ever do so. I love that two root for each other's success and empower all other women to do the same!

Her book, Bossypants, was a New York Times Best-Seller! It's an autobiographical comedy book so trust me, there are tons of laughs saved in there. The book stayed on the best-sellers list for five weeks upon its release. Impressive, huh?

4 She Calls People out

Tina Fey isn't afraid to call you out if that's what you need. When Tina and Amy hosted the 2013 Golden Globes, they might've made a slight joke about Taylor Swift's love life. When Taylor took offense to it, Tina told her to lighten up. "It's a shame that she didn't take it in the kind of crazy aunt spirit it was intended," she said.

Above all, Tina Fey is hilarious! She's done such amazing things like Saturday Night Live, Mean Girls, 30 Rock, etc. Also, how great is her book?! If you haven't already read it, I suggest you do so as soon as you can! It'll change your life, I promise.

Fey is far from being "too cool for school". In her book she writes, ""It is an impressively arrogant move to conclude that just because you don't like something, it is empirically not good. I don't like Chinese food, but I don't write articles trying to prove it doesn't exist."

If you didn't already know, the screenplay for Mean Girls was written by none other than Tina Fey! Rumor on the street is that she's in talks with Lindsay Lohan about setting up a cast reunion. How AMAZING would that be? If she pulls that off, I'd love her even more!

Well, there you have it! These are just seven out of many awesome reasons to love Tina Fey! She's just an amazing person and really there's nothing not to love about her! What do you love most about Tina Fey?

celebs
7 Celebrities and Their Honest Opinions on Motherhood ...
lifestyle
17 Times You Wanted Tina Fey and Amy Poehler for Your BFFs ...
music
4 Fab Reasons to Get Excited for Mean Girls the Musical ...
books
Essentials for Your Summer Reading List ...
health
11 Zen Ways to Laugh More and Stress Less ...