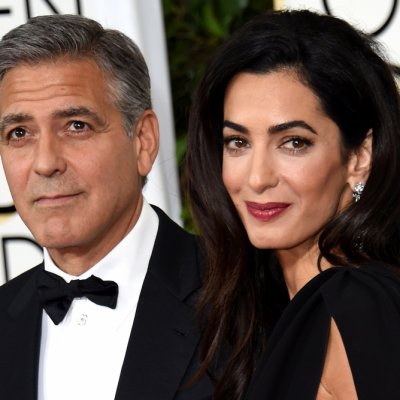 I can't be the only one who's a little tired of rolling my eyes and scoffing at most trending topics and magazine cover headlines... but I might be the only one who composes much-better alternates to them. Or maybe not? If you've been doing this too, let's compare notes! Here are my alternates to some trending topics and headlines I've seen lately...

It seems like we've all forgotten how incredibly smart, successful and talented Amal Clooney was, on her own, before she married George Clooney. I'd argue HE was the lucky one! But a peek at the headlines tells us that now, she's measured by what she's been seen wearing to his movie sets and red carpets. Please.

I can't imagine how difficult it must be to go through a gender reassignment and transition, but to do it in the public eye must be a thousand times worse. The headlines are an unpleasant mix of derision, condescension, and cruel assumption.

My Headline: Kylie Jenner admits cosmetic work, rejects pressure to have more because she's happy with her physical self

If you haven't seen the horrifying images related to #kyliejennerchallenge, you're missing out on seeing exactly how far teen girls will go to imitate a celeb who swears she's never gone under the knife, but who obviously has had some work done. I doubt she's applied a vacuum cleaner to her lips, or sucked the air in a cup, like her fans. News flash: Kylie Jenner is gorgeous, and it would be so, so nice if she could see it, too.

My Headline: Jessica Alba enjoys beach vacation with her husband and children, regardless of what she looks like in the bathing suit she's wearing

I can't count how many candid photos of celeb women have been captioned recently with some iteration of "So and so shows off her beach body in a black bikini on the beach!" Maybe, just maybe, Jessica Alba isn't "showing off" anything. Maybe she's just enjoying a day at the beach with her kids, wearing what one normally wears to the beach?

My Headline: Critics and fans alike applaud Pink's comfort with her down body and related fashion choices

I have to say it: Pink looked fantastically happy in that black dress. It was only later, when I saw the "news stories" about how people took her to task for her "flab" that I took a closer look and realized SHE LOOKED HAPPY. She wasn't hanging out of a dress six sizes too small, and she looks radiant. Maybe we ought to start weighing celebs at every red carpet, and have done with it.

My Headline: The Public respects Sia's request for privacy and don't comment on her wig any more than they comment on the costumes and identities of Daft Punk of Deadmau5

Why is it okay for the world to fume that we don't know what Sia looks like, but we couldn't care less about the looks of Daft Punk of Deadmau5? The cynic in me wants to say it's because she's a woman, so we're SUPPOSED to be able to judge her based on her appearance, but I hope I'm wrong. She wears the wig for privacy. In her words, she feels like it. And what's wrong with that? Nothing.

My Headline: Monica Lewinsky launches new career and is remembered more for her commitment to the anti-bullying cause than for her brief affair with some man

I thought Monica Lewinsky's TEDTalk was pretty darn good, and she made some fantastic points... but every day since then, and of course since Hillary made her running for Pres official, my Facebook and Twitter feeds have been loaded with memes and jokes about The Affair. As if the entire lives of these two women can be summarized so neatly by the mistake one of them made with one man. They're powerhouses in their own rights, and I wish we could stop with the blue dress jokes.

Old Headline at: vanityfair.com (Note: I kinda like this one.)

My Headline: Jennifer Aniston is completely happy in her life

I know, I know, some of these headlines are a bit lengthy and would make an editor cringe (then go nuts with the red pen). Which other headlines would you change? Do tell!