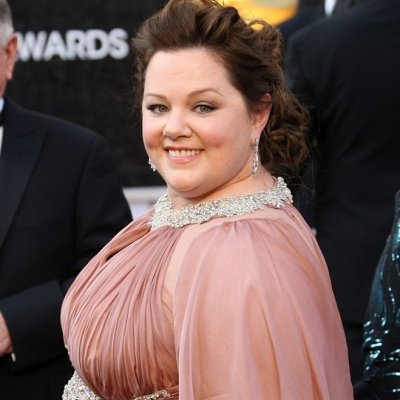 I absolutely adore Melissa McCarthy. I've loved her ever since her Gilmore Girls days, and now I love spotting her cameos in earlier movies – like the adaptation of White Oleander, for instance. She's unfailingly hilarious, and she's so full of grace. I think she makes an excellent role model for girls and women of all ages, and I love to see the way she breaks down stereotypes – for women, women in film, and comedy, just to name a few. Check out a few reasons Melissa McCarthy is just incredible, and please add your own!

Melissa McCarthy is not ashamed of herself. She's not constantly fighting her weight or making disparaging, self-deprecating comments about her body, as if she needs to please the masses. She knows exactly who she is, how much she weighs, and what makes her happy.

2. She's Not Afraid of Ugly-Funny

Have you seen Bridesmaids? Identity Thief? Melissa's not afraid to do ugly funny, unlike so many comedic women in the movies. I, personally, take issue with the behind-the-scenes choices to always make her look frumpy when she's so drop-dead gorgeous, but I still applaud her for taking risks and just not giving a damn.

This goes back to the lack of self-deprecation. In an interview with Rolling Stone, McCarthy admitted that she could work out more, drink less, learn something new – but, she says, she lives her life knowing she could get hit by a bus at any time. She's not sorry that she doesn't fit into the mold that Hollywood and the beauty industry try to push on everyone.

If you heard about the debacle with critic Rex Reed, and the heinous things he said about McCarthy, personally, in his review of Identity Thief, you know just how graceful Melissa is. She wasn't critiqued as an actress; she wasn't reviewed for her performance. Reed went after Melissa the person, and jumped on the fat bandwagon even though he has absolutely no room to fling insults at anyone. Instead of getting defensive or ugly in return, Melissa basically just shrugged it off. You can only imagine how much that hurt, but she's unbelievably kind to her haters. I would have verbally eviscerated him. However, she's also aware of what people say, and she's using these critics to shed light on larger problems in Hollywood.

5. She's Got a Realistic Love Story

I love Melissa's husband, Ben Falcone. He makes appearances in almost all of her movies, and many of the movies that her friends are in as well. You may also know him from his “denim” ditty for Target, which is the best thing ever. The two of them have a beautifully realistic relationship. Everything's not always perfect, their kids get on their nerves sometimes, but they also look at each other often with this gratitude for what they have, and that's just so gorgeous.

Melissa has worked her way up from the top, no doubt. From tiny cameos to her adorable turn as Sookie St. James, she's now a full fledged leading lady and she deserves every bit of her success. There is not a single movie I won't watch if she's in it, and I can't wait for Tammy. Tammy!

Really, I've been saying this all along, but the truth is that we need more body positive role models – of all shapes, sizes, colors, and lifestyles. There seems to be this feeling that if a woman weighs more, she has no business being happy with herself. She should strive to be slimmer. The truth is that health doesn't always have anything to do with weight, and women can be healthy, happy, and positive no matter what the scale says.

I think the world at large has been waiting for women like Melissa McCarthy, Rebel Wilson (such a crush, by the way), and Mindy Kaling, along with such goddesses as Laverne Cox, Viola Davis, and yes, even the incomparable Jennifer Lawrence. What are your thoughts?