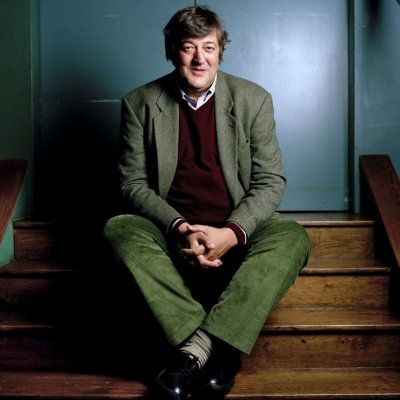 He’s become something of a “National Treasure” in the UK and that’s because there are plenty of reasons to love Stephen Fry. He’s one of my favorite men and there’s an awful lot about him I like. Writer, actor, comedian, TV host, quizmaster, radio personality, charity worker, tweeter extraordinaire, soccer fan, and all round good egg, I think there are so many reasons to love Stephen Fry and hope you think so too after reading this.

1. He’s Not into Glitz and Glamour

I love that Stephen Fry might be one of the UK’s most well known celebrities but that he is about as far removed from an A-list stereotype that you could imagine. He’s had his share of minor scandals and gossip column inches but they have never hurt other people, or caused major upset. One of the reasons to love Stephen Fry is that he doesn’t live up to the ideal of fast cars, big houses and the trappings of fame, instead preferring a quiet life in the Norfolk countryside, spending Saturdays cheering on his favorite soccer team Norwich City. Fry has become the quintessential Englishman.

Although highly intellectual, Fry is a self-confessed and very proud geek. He was one of the first UK celebs to embrace Twitter and is still one of the most-followed Brits. He really deserves credit for helping Twitter become mainstream in the UK. He presents Qi on TV which is about as geeky as a program can get and he was given free rein to flaunt his geekiness when asked to present Stephen Fry’s Top 100 Gadgets. One of my favorite statements from Fry that sums up his geekiness is “The finals of my degree at Cambridge was on the subject of Nietzsche and Tragedy. I mostly wrote about Star Trek”.

In an age where language has been mutilated and bastardized to text speak, slang and street, where grammar, spelling and punctuation are relegated to the realms of anonymity and ignorance, Stephen Fry is one of the greatest living exponents of the English language. His regular speech is eloquent and articulate, and it veritably drips with bon mots, while when wanting to make a real impression, every utterance is a treasure chest of delicious sounding words. How about this as an example - “Better to be sexy and racy, than sexist and racist”.

You might have already guessed that, from the last two points, one of the reasons to love Stephen Fry is for his intelligence. I am immediately attracted to an intelligent man. There are few celebs I can think of straight away who are as erudite as Stephen Fry.

Without his great sense of humor and sense of comic timing, I think he would be somewhat overbearing and, dare I say it boring. The fact that he can be supremely funny makes his other traits so much more attractive. He’s always ready to laugh at himself, but in shows like Blackadder and his partnership with Hugh Laurie in A Bit of Fry and Laurie and Jeeves and Wooster, he has us realizing what a great comedic actor he is.

One of the most common comebacks about the issues of fame is “well you chose to put yourself in the spotlight”. We know this. Celebs know this too but not all celebs are equal in the way they deal with it. One of my favorite reasons to love Stephen Fry is his honesty as a person and as a celebrity. He makes no bones about his problems as a teenager when he was expelled from school and his prison sentence for credit card fraud, but more importantly, in more recent years he has opened up about being bipolar and has become a de facto spokesperson about depression in the UK. He is also currently serving as the President of MIND – the UK’s most prominent mental health charity.

I’m not going to claim he’s a great writer because I think he would shrug that off. I think he would prefer to be called a great storyteller instead. He has written a number of books - 4 novels, several non-fiction works and two autobiographical works. He loves the works of Oscar Wilde (imagine how thrilled he was to portray him on film for which he was nominated for a Golden Globe) and Noel Coward (he’s currently the Vice President of the Coward Society). But what many of you will probably appreciate most as a testament to his storytelling abilities is that JK Rowling chose him as the narrator for the Harry Potter audio books.

I look forward to many more years of entertainment from Stephen Fry. I’m always interested to see whatever project he’s going to tackle next. Do you love Stephen Fry?