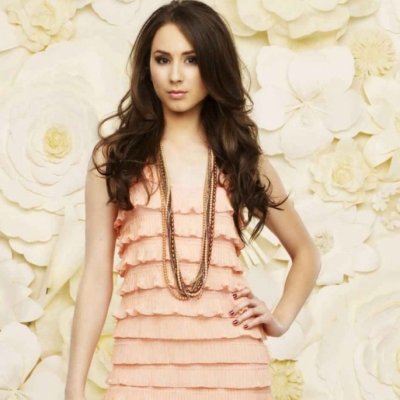 Troian has proven time and time again that her acting skills are phenomenal. I mean, remember when her character, Spencer Hastings, pretty much had a mental breakdown? Troian played that role incredibly. Troian also took on the lead role in a web series called 'Lauren.' She excelled in that and I can't wait to see what other acting projects she gets into. Her talent is just one of the reasons to love Troian Bellisario.

In case you didn't know, Troian just recently got engaged! Her fiancé, Patrick Adams, is from the hit show Suits on the USA network. The two make a great couple and are constantly showing each other love (when they're apart) via sweet messages on Twitter. I can't wait to see pictures from their wedding! But until then, you can see pictures of the two on both of their Instagram accounts.

The Pretty Little Liars girls recently did a photo-shoot for GQ magazine. When fans pointed out how "photo-shopped" the girls had been in their pictures, Troian opened up about it. "I'm not mad at how these pictures turned out, the girls and I had an absolute blast.. and I think you can see that in our eyes and smiles. This industry seems to invest more in perfection than in flaw. But flaw and individuality, to me, are what make a human being interesting, they make our stories worth telling. (Unfortunately the flaws don't usually sell products or magazines)."

One of Troian's hidden talents is the fact that she sings and plays the guitar! You can look at her videos on YouTube. My favorite is her rendition of "Skinny Soul." She even sings it with former Pretty Little Liars co-star Shane Coffey. I seriously suggest you check it out!

5. She Loves Her Fans

Troian is constantly showing love to her fans. Whether it be in person when she stops for photos and autographs, or on social media, she makes it known that she appreciates her fan base. She's always very truthful with them - for example, the photoshop rant about the GQ magazine photo-shoot!

Troian's becoming wildly successful but she hasn't let that change her. She's very humble and down to earth and never acts like she's "too cool for school." I saw her in New York City once and she was the sweetest person ever - she posed for a picture and even made some small talk!

If you follow Troian on Instagram (@sleepinthegardn), you'll notice that she posts a ton of behind the scenes photos from the Pretty Little Liars set. What more could you ask for?! The cast of the show is very close and always hangs out off-camera. By following Troian, you can see what she's up to when the cameras aren't rolling! She's also always traveling, so she posts beautiful pictures from wherever she is in the world.

Well, there you have it. These are just seven out of many reasons why you should love Pretty Little Liars' Troian Bellisario! She's a great role model for women of all ages and I'm looking forward to seeing all her awesome new projects. What's your favorite thing about Troian? What makes you love her so much?