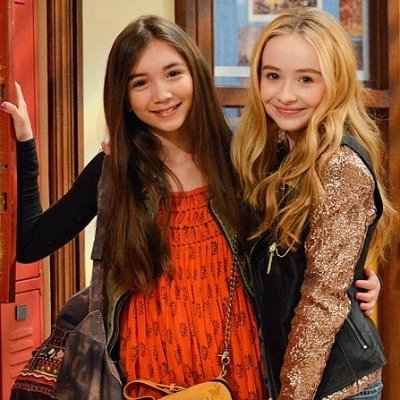 There are so many fantastic reasons to love Rowan Blanchard and Sabrina Carpenter, Girl Meets World's leading ladies. The two are incredibly genuine and sweet - something that's really refreshing in this industry. After watching the show's first episode, I have no doubt that these girls will be superstars! They've managed to accomplish way more than I ever did at their age (oops), but they deserve all that they get! Check out some of the awesome things to love about Girl Meets World's leading ladies.

Rowan and Sabrina play Riley and Maya, the inseparable best friends. Their friendship translates so well on camera because the two are actually real life BFFs! They're constantly sending sweet and encouraging messages via Twitter. They're super supportive of each other and have made it clear that they'll be each other's rock when this crazy fame roller coaster begins! Their adorable friendship is just one of the things to love about Girl Meets World's leading ladies.

With their show being successful, the two never forget to credit Boy Meets World. They're constantly showing their gratitude to Ben Savage and Danielle Fishel, who've taken the two under their wings. I think it's awesome that the two were already fans of Boy Meets World before signing onto Girl Meets World!

In case you didn't already know, Sabrina Carpenter is signed to Hollywood Records! Pretty impressive, huh? The multi-talented actress released her EP and received an overwhelmingly positive response from all her fans. Rowan's also got a voice on her. The two teamed up together to record the show's theme song, "Take on the World." It's available on iTunes!

The two have admitted to being total pranksters on set. There's even a prank war going on between the cast! I don't know about you, but I'd love to be a part of that! LOL - who do you think is the better prankster, Rowan or Sabrina?!

After watching the pilot episode of Girl Meets World, there's no doubt that the show's leading ladies are both amazing actresses. The two delivered their lines in a way that's already allowing the audience to fall in love with them. If you're a Spy Kids fan, you might recognize Rowan from Spy Kids: All the Time in the World. I'm so glad she gets the chance to shine now in her role as Riley Matthews!

Even though the girls are fairly young, they've got old souls. The girls are always posting inspirational quotes on their Instagram accounts. Rowan recently posted a photo that read, "The ability to simplify means to eliminate the unnecessary so that the necessary may speak." I don't know about you but I wasn't reading such profound quotes at the age of 12!

7. Their Love for Fans

Rowan and Sabrina are constantly showing love to their fans on their social media accounts! They're always replying/retweeting to fans who send encouraging messages. The girls also use their social media accounts to upload behind the scenes photos from set, exclusive videos, and more! You can follow them on Twitter (@rowblanchard & @sabrinacarpenter). Send them some sweet words and maybe they'll reply to you!

Well, there you have it! These are just seven out of many reasons to love Rowan Blanchard and Sabrina Carpenter, the leading ladies of Disney Channel's Girl Meets World. If you've already seen the pilot episode of the show, what'd you think? What's your favorite thing about the girls?