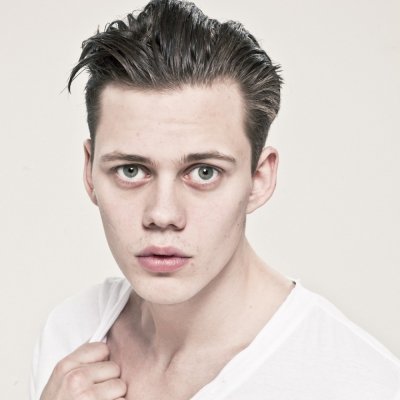 If you're not obsessing over this show, what exactly are you doing? I don't know why or how it took me so long to start watching it but once I did, I was hooked. The show deals with the supernatural element and approaches it in a whole new way. Bill's character, Roman Godfrey, is so complex and you spend your time debating whether he's good or evil. Still, you can't help but root for his happy ending. The show is just one of many reasons to love Bill Skarsgard.

In case you didn't know, Bill is actually Swedish! He puts on a pretty incredible American accent for the show, right? However, there are moments where he lets his accent slip and you can hear his Swedish twang. Those are my favorite moments. You can watch interviews online to hear his Swedish accent in full effect!

To state the obvious, Bill is some serious eye candy. If you're familiar with the actor Austin Butler (who doubles as Vanessa Hudgens' boyfriend,) you'd agree that the two could pass for twins. I wonder if they've heard that before. Anyway, Bill's not the only good-looking Skarsgard. He's also got a famous (and incredibly handsome) brother.

Whenever he hits up a red carpet or press event, Bill always looks super sleek and sophisticated. I think he has a lot in common with his character, Roman, where style is involved. Ladies, do yourself a favor and Google pictures of Bill in a tuxedo. Swoon!

After watching Hemlock Grove (and falling totally in love with Bill), the next logical step was to binge-watch all of the interviews that I could possibly find on YouTube. Luckily, there were a lot! My favorites ones are the ones of Bill and Landon (who plays Peter in Hemlock Grove). The two have definitely developed a true bromance and it's really cool to see them together goofing around.

If you think Bill's got a familiar face, it's probably because you've seen his brother, Alexander. He's also an actor and is on the HBO phenomenon, True Blood. The two brothers are very supportive of one another and I think it's more than fair to say that the two have definitely won in the genes department. I mean, they're BEAUTIFUL! I also think it's awesome that the two act in supernatural shows.

7. He Loves His Fans

Even though Bill doesn't have any social media accounts (UGH), he still makes his love for the fans known. He talks about it in interviews, how he's grateful for all of the support. The good thing is that you can follow his cast-mates on Twitter - there's a good chance they'll post a photo with Bill!

Well, there you have it. These are just seven out of many awesome reasons to love the hunky Bill Skarsgard. If you're already a fan of his, what's your favorite thing about him?