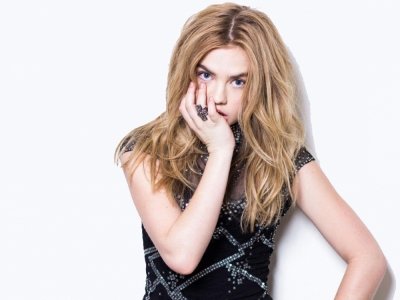 There are tons of reasons to love Madelaine Hasson! She's quickly become one of my favorite new actresses. If you don't already know her, she's on ABC Family's hit show "Twisted." She's also appeared on other shows like "Grimm" and "The Finder." I definitely think she'll be one of Hollywood's breakout actresses really soon. Check out some awesome reasons to love Madelaine Hasson!

If you don't already, follow her on Instagram! She posts HILARIOUS insta-videos and I can't help but 'like' every single one of them. One of the most recent video she's posted was one where she questioned "what happens when the refrigerator closes?" Haven't we all wondered that at one point or another? Well, Maddie does the work to find out! These hilarious insta-videos are just one of the reasons to love Madelaine Hasson!

On ABC Family's hit show "Twisted," Maddie plays Jo Masterson. She's a really laid-back girl who doesn't really need anyone to help her do anything. She's got one best friend and that's good enough for her. The dynamic between Jo and Avan Jogia's character, Danny, is really interesting. They kind of have this "Will they or won't they?" thing going on. I'm totally rooting for them to get together at some point, but who knows? Jo's really stubborn and might not be so easy to forgive and forget everything Danny's done. Either way, I love her character because Jo is very relatable!

3. She Loves Her Co-stars

Maddie is always posting photos of the cast hanging out off or on set. I love when celebrities genuinely like their co-stars because it makes the show's chemistry that much better. I love the fact that she's friends with Avan Jogia, Kylie Bunbury, and Ashton Moio. Psh, I wish I was in that circle of friends!

Believe it or not, Madelaine is only 19 years old. I know, it kind of makes you question your own life decisions, right? I mean, we're the same age yet she lives a totally different life! Still, I'm happy that she's so successful. It goes to prove that you can do whatever you want to if you work hard enough for it!

I love her sense of style. When she gets glammed up for red carpets, it's not even fair how pretty she is! One of my favorite looks she's rocked was at the People StyleWatch Denim awards. She wore dark skinnies, timberlands, a cool graphic tee and a red leather jacket. Loooove it!

I love when celebrities aren't "too cool for school." Madelaine seems like the down-to-earth girl anyone would love to have as a best friend! P.S. she seems like so much fun to hang with! I love that she's interactive with fans on Twitter because it shows that she cares about them. Honestly, I think she's just a girl living her dream and so she's far from letting fame get to her head.

Just like her Instagram posts, Maddie is hilarious on Twitter! She usually live-tweets the show while it's on and gives the best play-by-play tweets! It's also a cool way to interact with her because she might even reply!

Well, there you have it! These are just seven out of many awesome reasons to love Madelaine Hasson. She's become one of my favorite actresses and I'm excited to see all her upcoming projects. What do you love most about her?