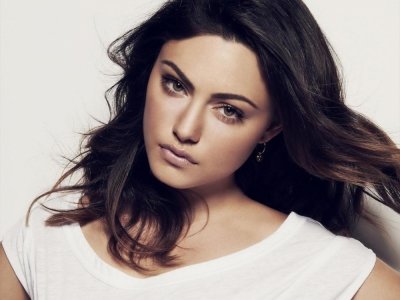 Phoebe's dating The Vampire Diaries' Paul Wesley. I know, right? The two are perfect together. They even recently went on vacation where they each posted adorable photos on their Instagram accounts. They seem to be very supportive of each other and things are looking good for them. Fingers crossed that they last for a really long time. This is just one of the reasons to love Phoebe Tonkin!

Phoebe can do it all. She's an actress/model and is pretty much taking over the entertainment industry. Her latest show, The Originals, has become wildly successful and I love Phoebe's role as Hayley. I think she's a fantastic actress and I can't wait to see more of her. Also, how awesome was she in 'The Secret Circle'? It's a shame that show was so short lived.

Phoebe's constantly showing love to her fans. At the CW upfronts in New York City, she posed with some lucky fans that were outside! She also shows love to fans on her social media accounts which I think is really cool. You can follow her on Twitter (@1PhoebeJTonkin) and who knows, maybe she'll reply to you one day!

When Phoebe gets glammed up for red carpet events, it's not even fair how pretty she looks! I mean, she's got some seriously cool style. She always manages to look sophisticated while still looking daring. She's always got my vote for 'best dressed' for any event that she attends!

Phoebe and her BFF, actress Teresa Palmer, co-own the site, yourzenlife.com. It features articles on how to lead a healthy lifestyle and it's super cool and useful! She has a mostly vegan diet and lives off green juices and yoga classes. I'll admit it, she's way healthier than I am! However, I do plan on trying to live a healthier lifestyle and visiting her site seems like a great way to start!

Is it just me or do you all have a fascination with foreign people, too? Maybe it's their accent that does it! But anyways, Phoebe's Austrailian and even used to blog on behalf of Vogue Australia which is pretty impressive. Rumor has it that Paul has spent time down under with Phoebe and I think that's so adorable!

7. She Used to Be a Mermaid

In case you forgot, Phoebe's break-out role was as Cleo in "H2O: Just Add Some Water". It was originally an Australian television program but eventually gained a worldwide audience! Although she's claimed to not be a strong swimmer, she practiced and performed all her underwater stunts! I mean, even if it was just an acting job, Phoebe can add "mermaid" to her resume and that's pretty awesome.

Well, there you have it! These are just seven out of many awesome reasons to love Phoebe Tonkin. She's gorgeous, talented, and totally BFF-material. What's not to love? If you're a big Phoebe Tonkin fan, what's your favorite thing about her?