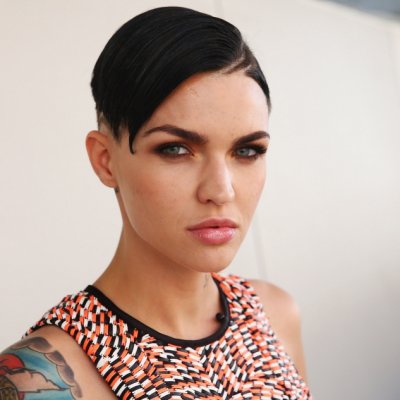 I love that the world today is becoming so much more open. People are finally recognizing that gender and sexuality are not black and white, that there are spectra, and that not everyone fits neatly into the boxes, categories, and labels into which society shoves everyone. Genderfluidity is increasingly visible, and that's what I want to focus on right now. Being genderfluid is a bit like embracing androgyny, but not quite. People who are genderfluid generally identify as female and male, or somewhere in between, and that can change from day to day – hence the “fluid” bit. They acknowledge and embrace the feminine and the masculine within themselves. I think that's beautiful, and brave, and so important. These celebrities identify as genderfluid and I think they are beautiful and brave, as well.

Say what you will about Miley, she is always true to herself – even if it's not “socially acceptable” by everyone else's standards – and she brings awareness to and promotes visibility of a number of important causes. She's been open and honest about questioning her gender, and although she doesn't publicly place herself on the gender binary, she does admit that she doesn't relate to being either female or male. Moreover, she doesn't expect that of potential partners, either.

I adore Tilda Swinton for so many reasons! Her talent is formidable and it extends to believably playing male and female characters. Most of her roles see her looking unrecognizable – she's such a chameleon! She's admitted that there are times when she's been "kind of a boy," although she's "probably a woman now." That actually makes me love her more.

Oh, Ruby Rose, beautiful thief of hearts. She's outspoken about her gender identity, which is really rather terrific. For those who are not in the know, she is not just the newest hottie on OITNB, she's also a DJ, a model, and an inspiration. She identifies as gender neutral and tends to go with however she's feeling when she wakes up.

I adore Angel Haze. I love her music, her message, and her general personality. In a 2015 interview with Buzzfeed, Angel revealed, “I’m not really a girl. I don’t feel comfortable in these clothes. If anything, I feel more on the guy end of the spectrum.” She's identified as agender and pansexual.

If you don't know Alok yet, you soon will. Alok firmly prefers they/them as pronouns. They co-founded Dark Matter, which is a collect of poetry and social activism, they have an affiliation with the Audre Lorde Project, and they've done work with both StyleLikeYou and MTV. Alok is many things – a performance artist, a writer, and an activist, for starters – but they are also an inspiration to many people.

You might recognize JD Samson as the founder of both MEN and Le Tigre. She considers herself beyond gender, post-gender, and thinks the either/or, boy/girl gender binary is completely outdated.

Andreja is stunningly gorgeous and always has been. Fans of her modeling have seen the beauty of her transition unfolding over the years. She works her signature icy androgyny with poise and elegance and considers herself living in between genders.

If you didn't catch Tyler on “Diary,” I urge you to catch the episode. You may have also seen him on a little show called “Glee Project.” He's a ridiculously talented singer, not to mention a model, a poet, and a writer. He's agender, too.

Eddie Izzard has been an inspiration for me since the first time I saw one of his comedy shows on HBO. (“Cake or death?”) He's hilarious, talented, an excellent actor, and his makeup is always flawless – plus he even makes vinyl look good and his legs look ridiculous when he wears heels. Over the years, he's identified himself as many things in shows and interviews – a male lesbian and a “boy plus half girl,” among others.

Didn't know Aerosmith's Steven Tyler identified as genderfluid? It may or may not have been a little tongue-in-cheek, but in Does the Noise in My Head Bother You?, he poked fun at the frequent commentary about him being “more female than male” and corrected the asserting by claiming it to be “half and half.”

What? Pete Townshend? The guitarist for The Who? Yes indeed. As far back as 1989, Pete said he knew how it felt to be a woman because he was one. He refused to be defined as “just a man.”

If you watch “The Fosters,” you definitely know Tom Phelan. Although Tom plays a trans* male on the show, they personally identify as non-binary and prefers they/them for pronouns.

Kate's books are worth a read – definitely her autobiography, A Queer and Pleasant Danger, and if you're interested in reading different perspectives on gender roles, she's written on that subject, as well.

This is Mx. Justin Vivian Bond to you and v (not a typo – that's Justin's preferred pronoun) is so far beyond gender. I strongly recommend checking out Justin's music or drag performances, not to mention v's cabaret – it's astoundingly good!

Elly is part of La Roux, an electropop duo from Britain. She hates being pigeonholed by gender; she doesn't want to be forced into some neat little box. Respect, Elly.

Say what you will about Jaden Smith, too, but I advise you to look past his parents, his tweets, and his pseudo-philosophical statements. Look beyond all that. This kid does not care what anyone thinks. He's on a journey to his own personal happiness.

Cara has zero time for outdated gender ideals. No time.

Oh, Richard O'Brien. Richard O'Brien! As a writer, composer, filmmaker, and actor, he's been pushing the rigid definitions of gender roles for decades. I mean, this is the beautiful creature we have to thank for Rocky Horror Picture Show. This is Riff Raff! He outspokenly admits he's in between the gender spectrum and describes himself as “70 percent male and 30 percent female.”

Any surprising names on this list? More importantly, if you question your gender or feel that you might be fluid, that is okay. It's more than okay, it's beautiful – and you're beautiful. And if you don't understand this, then please – open your mind, educate yourself, talk to people who do identify as genderfluid.

inspiration
Phrases to Think about before You Use Them ...
lifestyle
7 Obvious and Not so Obvious Societal Differences in Gender Norms ...
celebs
Emma Watson Shines on New Elle Cover While Discussing Feminism ...
lifestyle
What is Latinx
celebs
HeForShe Male Celebs Supporting Gender Equality ...